We arrived to the land of sunshine on Monday!  On Tuesday, Phoenix hit 100 degrees F (that’s 38 degrees Celsius for my Canadian friends) which was the first day of triple digits for this year.  We went from a vacillating winter/spring to summer in a matter of a few hours!  It has been so wonderful to wake up to sunny skies.  We decided to stay with Nick’s mom while we are here.  She has a two bedroom condo so we will be cozy but some of the perks are that we have access to two pools and a hot tub, the zoo is right down the road and there is an extra adult around in the evenings, at night and on the weekends just in case.

The boys are loving the pool!

Preparing to get here was no small feat.  We had been staying in the home of our friends (who had been renting) in Abbotsford.  In February the owners of the home decided to put the house on the market and it sold.  The official move out date was for May 14 but since we won’t return to Canada until the end of May/ beginning of June we had to move out before we left for Arizona.  We’ve only been there since mid January and Nick and I were shocked at how long it took us to pack up our stuff.  Why? How?  So. Much. Stuff.  Unbelievable!  But we got it all out and the majority of it in the storage unit we decided to rent in Abbotsford.  We decided to rent a storage unit instead of driving it all back to our place 2.5 hours away only to bring it back down after we get back.  We will need to find somewhere else to stay once we return to BC but with so many balls in the air currently it’s not even on our radar at the moment.  God will work that out.  We will probably end up staying at Ronald McDonald House or Easter Seals for the first little while after we get back.  Nick did the math and we will be almost half way done with treatment once we get back from radiation.  Nick and I have noted that things feel to be moving at a faster pace lately.  We find ourselves surprised at how quickly a new VAC or IRIN chemo comes around.  I’m torn about this.  For Nico’s sake, I want this year to go by as quickly as possible.  I want this year to get so far behind us that it will be a little blip on our road map.  I recognize, however, that this year will shift our lives fundamentally.  Then there is baby Nali.  She is five weeks old today.  Anyone with children will tell you how quickly they grow up.  It’s true.  And so even though I want this year to be fast forwarded like skipping through the scary parts of a movie, I also want this first year of babyhood to be slow and I want to be able to savor it fully.  Nali will most likely be our last baby.  When I try to snuggle V, who just turned four years old, and feel how he has outgrown my arms and lap I know that too soon Nali will be four as well.  But right now she is five weeks old and tonight I will go to bed and lay next to my baby and be in the same room with all my boys.  And when she wakes up at 2 a.m. I will enjoy the smiles she shoots my way and snuggle her a bit longer while she breast-feeds.  This season will teach me to complain less and make the best of any moment- something I need to learn desperately.

Tuesday Nick and Nico were at Mayo Clinic for the planning CT scan.  That all went well. Nick met with Dr. Keole, Nico’s radiation oncologist there at Mayo.  Nick recorded the meeting with him so I could listen.  He was very knowledgable and informative.  Nick says the building is very new and super nice.  Nico said everyone was really nice and he had a good first experience there.  We haven’t heard yet when his radiation will begin but most likely next Thursday or the following Monday. 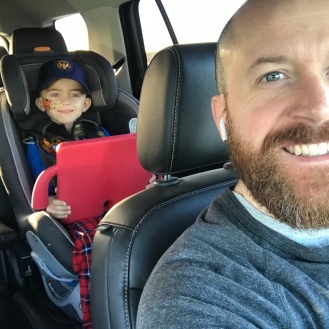 On their way to Mayo Clinic. 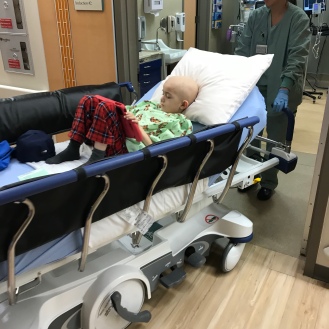 Heading to his CT scan.

All done! Time to wake up.

Yesterday we all headed over to Phoenix Children’s Hospital for Nico’s chemo.  He will continue to receive his chemo as scheduled during the radiation.  This week was week 12 with the easy vincristine chemo.  We met the team there and everyone was very nice.  It was interesting to note the little differences between how things are done here versus at BC Children’s but overall it was comparable.

In the infusion area at Phoenix Children’s.

Nico loved driving the Tesla down the halls. 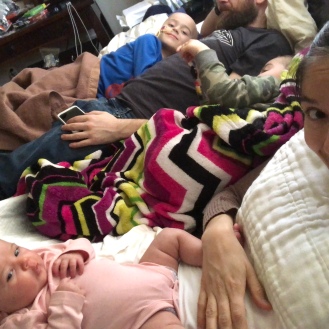 We have a bit of a break between now and next Thursday as long as no fevers pop up.  We are hoping to enjoy the pool and possibly the zoo before Nico starts radiation and is admitted for his VAC chemo next week.

3 thoughts on “Eight Weeks of Fun, Sun… and Radiation”